This study came about as a result of experimental computer simulations of Coulomb forces and interactions between protons and electrons in hydrogen atoms as well as between quarks in protons and neutrons. The gravity simulations showed a weak but consistent and robust attraction between particles with zero external charge irrespective of simulation parameters imposed on the particles.

Entanglement, strong force, gravity and magnetism are caused by subatomic attraction between charges and/or dipoles. As such it is part of quantum physics even if the underlying mechanism can be described in context of Coulomb forces in easy to understand classical physics shown below.

Action at a distance can be used to describe entanglement, gravity and magnetism. They are all the result of Coulomb forces between charged particles and/or dipoles. The main difference is the strength of the EM Coulomb link between them. While gravity and magnetism are caused by a Coulomb force between dipoles in neutral particles, entanglement is caused by the full Coulomb force between charged particles. Consequently the Coulomb force link between two entangled particles is 1/(9*10^-19) = 1.111*10^18 times stronger than gravity. Take for example the case of two electrons from the same atom and thereby entangled by having become synchronized. Even when separated by a long distance, observations suggest that if we disturb one to change for example its spin direction, so does the other one though it is seemingly undisturbed and far away except for its strong Coulomb entanglement with its partner particle.

Strong force is the result of multiple competing Coulomb charge force vectors. These forces are both attracting and repelling and the distance between participating charges determine the strength of individual force vectors specific to each pair of interacting charges, and to the resultant force. At the minimum distance attracting forces dominate resulting in an attracting strong force. However, at a slight increase in the distance between the quarks involved the composite attracting force goes to zero and the repelling force of same sign charges take over to produce an explosive repelling force associated with nuclear decay and often called weak force. See details below.

Coulomb forces between two hydrogen atoms are both attracting and repelling. The separately computed individual forces are large but essentially cancel each other except for resulting in a weak, attracting compound force.

It was concluded that because of the electrostatic elasticity between protons and electron orbitals in atoms, the strong Coulomb forces result in small shifts in the location of the charges, in turn resulting in the polarization, the directional alignment, the elongation and the weak, attracting compound force seen in the simulations.

Because of the directional freedom of the atoms in a non-magnetic material the polarization of atoms described above results in an elongation of electron orbitals and a slight offset between the center of effort of the negative electron charge and the positive charge of the atom nucleus, while maintaining both centers of effort in the plane of the slightly elongated electron orbital.

See magnetism below for the difference between the coplanar offset above causing the net Coulomb force of gravity and the separation of planes of charge described below causing magnetism.

A permanent magnet is characterized by electron orbitals being parallell and unidirectional. This results in the negatively charged orbital electron plane of one atom being strongly attracted and offset toward the positively charged nucleus of the next atom. This in itself creates a strong negative pole on one end and a strong positive pole on the other end. It results in strings of nucleus, orbital plane, nucleus, orbital plane etc, producing a very strong, accumulative dipole effect which we know as magnetism. Take two of these and place them end to end such that the orbitals are still unidirectional and you get the force of magnetic attraction between the two. Turn one around and you get a force of magnetic repulsion between the two.

Compare this to gravity where orbital planes are not in parallell and free to orient themselves to maintain the center of charge of the nucleus in the plane of the electron orbital with the slight eccentric offset of gravitational force within that plane causing the much weaker force of gravity.

The root cause of entanglement, strong force, gravity and magnetism is in all cases Coulomb force between electric charges and/or dipoles.

Electromagnetism replaces the parallel ferromagnetic orbital planes with a coiled conductor carrying a current of electrons in essentially large, parallel orbits. Calculations of the effects can be done via magnetic fields or directly from the Coulomb effect of voltages powering the system on the currents of charge in the system.

All charged particles are connected by electrostatic Coulomb force. This is undisputed.

According to Cern this force propagates with the speed of c.

Through times this has been believed to be propagated by the existance of an Aether or more recently of an E or EM field. However, what is transmitted is an undulation of existing electrostatic Coulomb force and the effect is determined by the recipient charge depending on the frequency and the force level received. Examples are: Radio, wifi, microwave, radar, infrared, visible light, ultraviolet, x-rays or gamma.

Light is consequently propagated in form of an undulating Coulomb force which has the same effect on a body with mass as that caused by a mass with dipole Coulomb charge. This does not mean that light has mass, only that it participates in dipole gravity and gravitational lensing as observed.

The conclusions above are consistent with the conclusions of a more recent quantum physics study from 1998 by Bernhard Haisch, Alfonso Rueda and H. E. Puthoff.

A NASA-funded research effort is also reported to be under way at the Lockheed Martin Advanced Technology Center in Palo Alto and at California State University in Long Beach.

The moving red dot indicates the direction of the dipole axis from the proton to the center of charge of the electron orbital. 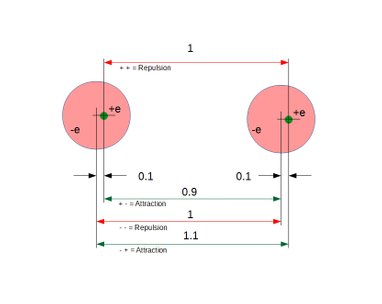 Figure 1. Conceptual example of conditional polarization according to Coulomb's law:

As can be seen in the result above, the Coulomb interaction between two atoms always yields a small, positive attracting force between the atoms. 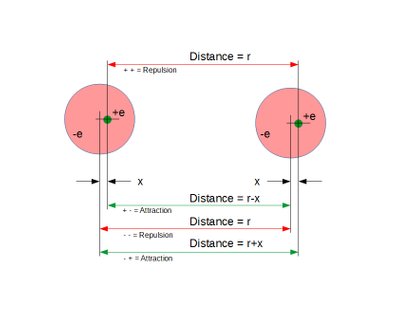 Calculation of dipole offset distance X between positive and negative charges in one of the atoms when 1*10^-10 meter apart above. 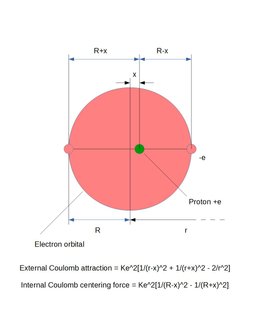 Gravity between two hydrogen atoms according to Newton and the gravitational constant = 1.8613*10^-44 N.

This explanation for the cause of gravity is very convincing. However, more detailed and accurate simulations and calculations should be performed by third parties interested in the scientific causes of gravity and magnetism as well as to establish a theoretical determination of the gravitational constant.

An atomic clock runs 30 microseconds per day slower on earth than it does in GPS satellite orbit. This corresponds to a relative error of 3.472*10^-10.

This is the electrostatic attraction between the electron and the proton in the hydrogen atom according to Coulombs law.

This calculates the net dipole elongation force acting on the hydrogen atom.

Assuming a linear relationship between relative dipole elongation force and relative hydrogen clock frequency, the error in clock frequency at the surface of the earth caused by Coulomb dipole gravity should be:

The atomic clock error to be expected at ground level, calculated using the effects of Coulomb polarization corresponds within 0.103*10^-10 to observed values. The difference in the last decimal is most likely the result of approximating the electron orbital as circular when in reality it is slightly elliptical.

Compare this to the charge of the proton (or electron):

As can be seen from the above, the effective charge of a hydrogen atom dipole is in this case a minuscule portion of the charge of any of the two constituents, the proton and the electron:

The effective charge and the subsequent force of gravity are consequently very weak compared to the charges and forces at work in for example strong force.

As a third method to quantify the expected consequences of Coulomb polarization, computer simulations were performed to map the locations of all charges including distances between charges and the directions of all dipole axis in deuterium. All attracting and repelling Coulomb binding forces were then calculated. The compound of these forces is the net binding force holding the proton and the neutron together in a deuterium atom. This compound net binding force, also known as strong force, is a short reach force which upon forced separation between the proton and the neutron goes to zero before turning into a repelling force. Integrating the compound binding force over the distance between maximum strong force and the attraction/repulsion cross over point yields the total binding energy of deuterium. 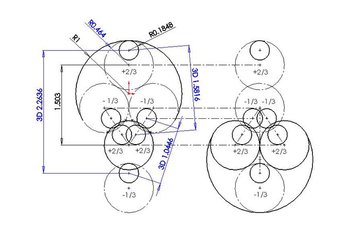 The binding energy of deuterium calculated as described and illustrated above corresponds within 1% to published values. For the full calculation of this binding energy contact the author below.

A mechanism similar to the dipole formation in interacting atoms has been observed in computer simulations involving quarks in interacting neutrons and protons. A neutron consists of one +2/3e up quark and two -1/3e down quarks giving the neutron an overall charge of zero.

Quark posturing, Coulomb interaction and attraction prior to transmutation and strong force:

Figure 6: Protons at the cross over point between repulsion and attraction. 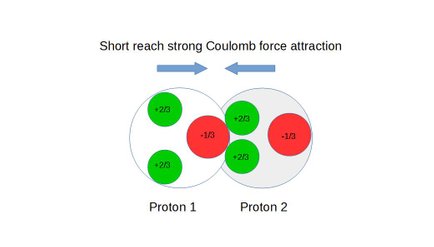 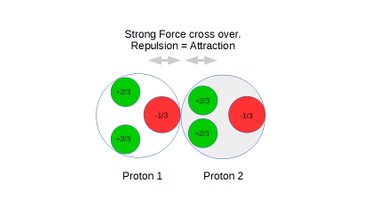 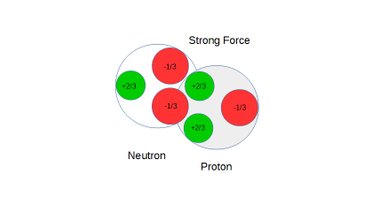 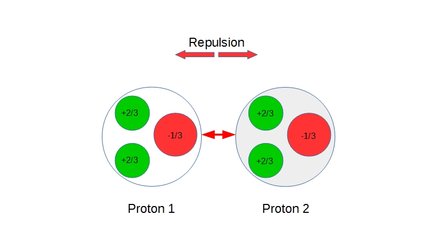